Sunflowers, Roses, Carnation - Gloria is a lush boquet, so rich in variety, that whenever we prepare these flowers we fall in love with them and have a hard time letting it go to our customer. But then again, we sell flowers because we want to let the world bloom - and Gloria has mastered this task.

Nothing. It was perfect, thanks

B
Belle C.S.
A great purchase

None! It was overall a great purchase for my mom’s birthday.

A
Amy A.
Super delayed and far from original arrangement

I have been a regular Flower Chimp customer since March 2021. My first order was a breeze and handled by an efficient customer care assistant.

This Gloria flower arrangement was my 5th transaction since I placed my first ever order. I noticed that Flower Chimp does not deliver on time. It does not even give any updates on the delivery status. I had to repeatedly follow up (via email and phone) to find out where the rider was, or it the flower arrangement had even been dispatched by the local partner. I booked a 9AM to 1PM delivery time. The flower arrangement for my mother’s birthday was finally delivered at almost 3PM and only after persistent follow ups. Worse, the flowers were not arranged by the florist the way they were shown in the website. It was a hodgepodge of sunflowers, carnations, and roses hastily dumped in a vase. No resemblance at all to the flower arrangement depicted above.

Nonetheless, my mother was still very happy and pleased with her flowers. She was totally unaware of the stress I encountered in following up the delivery. 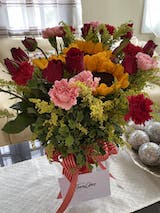 Ordered this as a surprise for mom's 60th birthday. Selected 9am-1pm time for delivery.

We have other plans for the day hence I've been calling their hotline to ask for the delivery status since it's already 11am and the flower was not delivered yet. I was told to call by 12nn if the flowers are still not delivered.

So I called a few minutes past 12nn and was told that the flower is already ready and they are just waiting for the delivery guy and we can expect to get it on/before 1pm (since the flower is in San Isidro, Makati and my mom lives in Sampaloc, Manila).

Lo and behold. Come 1pm, no flowers still. Weare about to pick-up our mom for lunch but can't leave the house because of the flowers. Tried calling them around 1:30pm and was told that the delivery guy is near (they mentioned the nearest landmark). The landmark is a mere 5 minute walk from mom's place so we waited outside for 30 minutes before I decided to call their hotline again because it's been taking a while for someone very near to not be able to deliver the flowers if they are already around the area.

Much to our surprise. The driver is already in Valenzuela! From being almost near mom's place, he is now almost an hour away! The flower arrived almost 4pm! It was beautiful, mom loved it but the delay was horrendous! Had to eat light snacks while waiting for like and eternity and ended up having dinner instead of lunch because of the delivery delay!

The driver even had the audacity to tell us "hindi ko naman po alam na nagmamadali kayo". The nerve! I clearly picked 9am-1pm as delivery time because we have plans! If I didn't pester them thru phone, who knows what time they would deliver the flowers!